Once you’ve walked the Freedom Trail and ate cannolis in the North End, it’s time to check out the hidden gems in Boston. After all, Bostonians aren’t always the humourless, sanctimonious Puritans that they would like to present themselves as.

These hidden gems in Boston show you some of the artistic and intellectual secret spots in Boston.

Also called skinny house, this narrow house was built as a “spite house” – to spite someone over a property dispute. And, boy, can this New England crowd hold a grudge.

Two brothers inherited land and while one brother was off fighting the Civil War, the other brother built a huge house on the land. Upon his return, the other brother blocked the deceitful brother’s light access by building a 10 foot wide house next door in the remaining available space. Although the house is only 2 bedrooms and 1 bathroom with a square footage less than 1200 s.f., it does offer a glimpse of Boston harbor.

This being prime Boston real estate, property values weren’t that badly affected. Spite House sold in September 2021 for a whopping $1.25 million after a bidding war where it went for over the asking price! See the photos on Zillow which show Spite House looking modern, urban and snazzy on the inside. This skinny house, one of the secret gems in Boston, tells a story of sibling rivalry.

For those paintings and sculptures that will never be appreciated in another setting, they can find a home at the Museum of Bad Art with its slogan “art so bad, it’s good”. Started in 1994, the museum has three physical locations near Boston as well as its website showcase. Overall the museum has about 800 pieces but only a handful are shown at a time.

With its main location in Somerville, this museum is great for an entertaining and amusing afternoon. Decide for yourself which is the best (or worst?) painting on display. If you are in Boston around Christmas time, make sure to visit the Somerville Christmas lights display as well. Located in the Mary Baker Eddy Library, the Mapparium is a world-famous three-dimensional globe experience. Considered one of the best maps in the world in terms of the scale and positioning of countries, you walk into a stained glass representation of the world where you are literally see the world as it existed in 1935 on all four sides of you. The Mapparium is a stained glass marvel of the world as a snapshot in time.

The Brattle Bookshop in Cambridge

Famous for being one of the oldest used book stores in the United States, the three story Brattle Bookshop in Cambridge are a book-lovers dream. The first two floors contain second-hand books, while the third floor is dedicated to rare and antique books. A mural outside the Brattle Bookshop, one of the hidden gems in Massachusetts.

The Schlesinger Library on the History of Women in America was started in 1943 when a suffragist alumnae donated her collection of feminist works to Radcliffe College (now part of Harvard University).

The library has thousands of books, magazines, newspapers, photographs and audiovisual material. What makes this one of the hidden gems in Boston though is the historic world-renowned culinary collection.

About 20% of Schlesinger Library is old cookbooks, pamphlets and journals – approximately 15,000 works covering five hundred years of culinary recipes from around the world, including the original papers of American chef, Julia Child and British chef, Elizabeth David.

Part of the Harvard Medical School, the Warren Anatomical Museum is not for the squeamish. The anatomy and pathology collection started as specimens for the teaching of medicine. Most of the tens of thousands of items are not available for public viewing, but  include historical medical devices and anatomical casts.

SoWa is the nickname for an artsy neighbourhood in Boston – south of Washington street. Leave the rigid Founding Fathers and Boston Brahmins behind to hang out in this vibrant art and design district that has lots of art galleries and boutiques.

There’s also a disused Power Station which has been turned into an events venue. In December 2021, the Imagine Van Gogh exhibit which is touring the world will show up here.

Every Sunday there is a SoWa market. There are also regular vintage markets and farmer’s markets. At Christmastime, there’s a SoWa Winter market where you can buy cool and unique Christmas markets. Hidden gems in Massachusetts include the SoWa Art & Design district.

This state park has the highest single-drop waterfall in Massachusetts, with lots of hiking trails and picnic areas for a scenic meal while visiting the park.

Bash Bish Falls is known for being especially beautiful to visit during the autumn when the trees are in full colour and is easily one of the best tourist attractions in Massachusetts. Bish Bash Falls in the beautiful Berkshires of Massachusetts, one of the must see places in New England

The Bridge of Flowers

Formerly a trolley bridge, this seasonal footbridge connects Shelburne and Bucklands over the Deerfield River. It is open from April to October. Covered in over 500 varieties of plants and flowers from spring to fall, it’s a beautiful spot to visit and get some photos of your trip to Massachusetts.

The trolley stopped working on this bridge in 1928 and is now housed nearby at the Shelburne Falls Trolley Museum. The visitor center is a little railroad museum and you can also take a ride in the Trolley that was built in 1896. The Bridge of Flowers in Shelburne Falls is beautiful no matter the season.

People call it Webster Lake because … you know. If you are in the area, you know you have to visit the lake with the longest name in the United States. It’s almost 1500 square acres with 17 miles shoreline.

When the Native Americans lived here, the lake had the fairly short last section of its name –  Chaubunagungamaugg which means fishing place at the boundary. After the arrival of the English colonists, the longer name refers to the addition of a descriptive term for the white men and the native Americans.

It’s a local tourist attraction, Massachusetts residents who can’t make it to the shore for the summer cool off at Webster Lake. It’s a pretty lake for swimming and kayaking and even has its own little beach for summer fun.

Purgatory Chasm is a Massachusetts state park near Worcester that with unique rock formations and miles of hiking trails. This off the beaten path Massachusetts natural wonder was created during the last Ice Age about 14,000 years ago when glacial meltwater ripped out bedrock in its way.

The state park is closed during the winter because of the danger of slippery rocks. MA state parks like Purgatory Chasm State Park are great for hikers of all abilities.

The Heritage Museum and Gardens in Sandwich has created a river of flowers. More than 35,000 grape hyacinths create a river of color flowing downhilll with thousands of daffodils representing floral eddies.

In full bloom, this installation is a beautiful sight to behold among Cape Cod attractions and is worth a day trip from Boston just to experience it. Outdoor hidden gems in Masachusetts include a river of Hyacinths in Cape Cod.

Take a break from the rush of daily life at the charming Japanese style garden on Chappaquiddick Island. There are several walking paths which lead past a pond, arched footbridge, and rock gardens. Visiting a small but perfect Japanese garden is one of the unexpected things to do in Martha’s Vineyard.

Other Hidden Gems in Massachusetts

Bet you didn’t think there would be a world-class Russian icon museum in Johnny Appleseed country central Massachusetts did you?

Housed in 19th century mill building, the Museum of Russian Icons in Clinton has more Russian icons than any other museum outside of Russia.

Holding more than 1,000 Russian icons, this unique tourist attraction in Massachusetts has both a permanent collection as well as regular visiting collections. In addition to the cultural collections, the museum is also a research center and offers various educational programs.

One of the cultural tourist attractions Massachusetts is the Russian Icon Museum in Clinton.

The mechanical engineer owner of Paper House built a frame of wood to which he added walls made from 100,000 newspapers. It was all glued together with a homemade concoction of flour, water and apple peels. And, loads of varnish.

Once again, no one knows why this off the beaten path Massachusetts site was created. He clearly just was into recycling before it became a thing! Rockport, an easy weekend destination from Boston, has lots of other things to recommend it, too! Unique places to visit in Massachusetts include a house made out of stacks of newspapers including this sunporch.(Image credit: Paper House Rockport)

Known as the Gingerbread houses on Martha’s Vineyard, these charming homes are what’s left over from the annual summer Methodist meetings that took place here in the 19th century. Originally the Methodists met in tents, then they started building fanciful little cottages to make their visit more comfortable. For a long time my daughter’s favourite house among the Gingerbread Cottages was the all-pink house.

Once the home of the famous American author Edith Wharton, this estate in the Berkshires has become a historic attraction and house museum, with tours of the house and gardens available.

“One of America’s best historic homes.” 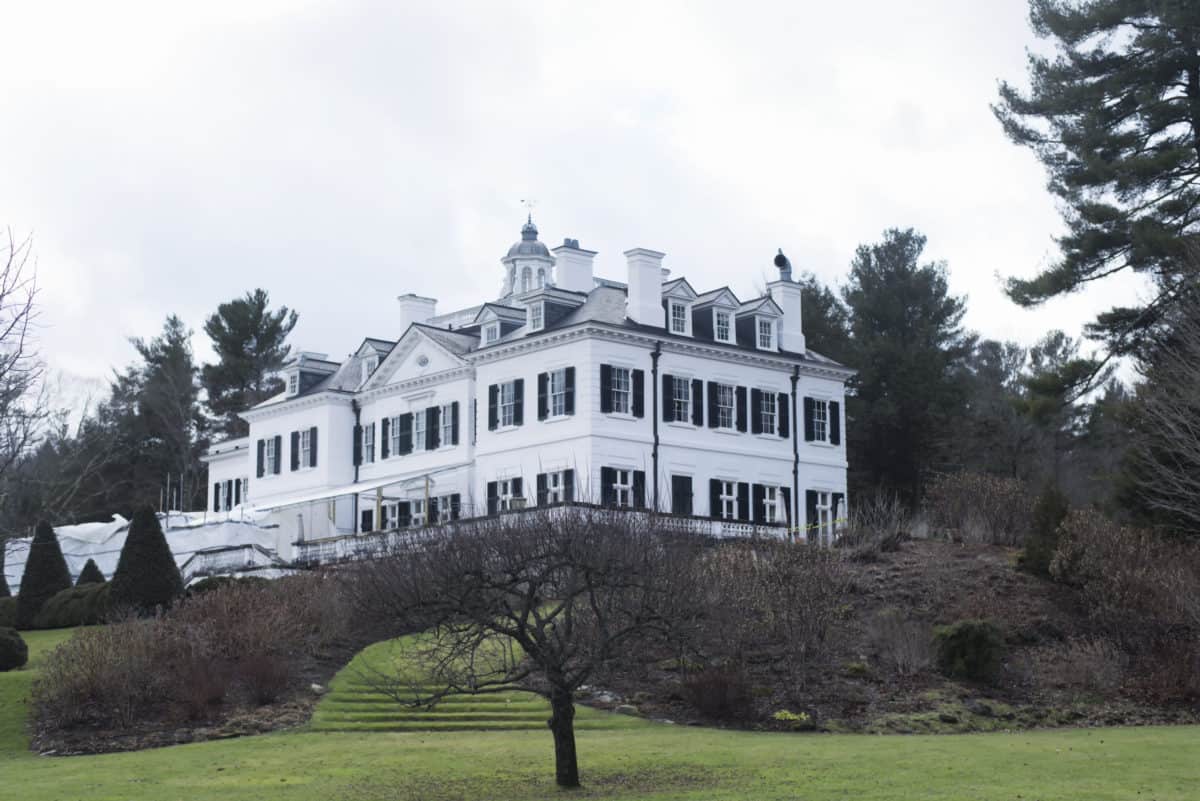 There are so many things to do in the Berkshires including a visit to The Mount, Edith Wharton’s house.

Built in 1900, Bancroft Castle is named after local boy George Bancroft who rose to be secretary of the Navy. No one knows why it was built but this Massachusetts castle cost $15,000 in 1900.

Bancroft Castle is now part of Salisbury Park. You can park a car near the castle, or hike the longer East-West trail for some beautiful wooded scenery in addition to visiting the unique castle-like landmark. Bancroft Castle, one of the hidden gems in Massachusetts, many people don’t know about.

Ponyhenge is a strange and mysterious herd of abandoned rocking horses located in Lincoln. No one is quite sure how the first horses got there in 2010, but the number has started to grow. It’s unlike any typical tourist attraction, and worth a short stop if you’re passing through Lincoln. When you get off the beaten path, Massachusetts has some great oddities like Ponyhenge.

You’ll have the chance to ride on the oldest platform carousel in the United States when visiting Oak Bluffs. The brightly painted carousel was built in 1876 and brought to Martha’s Vineyard from Coney Island to make one of the unique tourist attractions in Massachusetts. Kids love to ride the Flying Horses Carousel in Oak Bluffs, one of the fun things to do on Martha’s Vineyard with kids.

We are a participant in the Amazon Services LLC Associates Program, an affiliate advertising program designed to provide a means for us to earn fees by linking to Amazon.com and affiliated sites.
509 shares